Only a radical reimagining of how farming is done in this country can avert disaster.

India is staring at a major crisis. A little over half of its soil is affected by varying degrees of degradation. And extractive agricultural practices, heavy chemical and fertilizer use, and poor irrigation management are mainly to blame.

Healthy soil contains three major nutrients – phosphorus, potassium and Nitrogen. They are imperative for healthy vegetation and, thus, directly decide the quality of food we grow and consume. Another, and arguably more important, constituent of healthy soil is organic matter, the plant and animal residue that eventually decomposes to release the macronutrients required for the growth of vegetation.

Indian soils traditionally have low nitrogen and phosphorus content, but high potassium. As per the 2019-20 Soil Health Survey conducted by the Indian government, 55 percent of the country’s soil is deficient in nitrogen, 42 percent in phosphorus and 44 percent in organic carbon.

To compensate for this nutrient deficiency, Indian farmers have to use chemical fertilisers. Indeed, fertilizer use is indispensable for Indian agriculture today. But while fertilizers can increase crop yields and, thereby, ensure food security – as the Green Revolution most famously demonstrated – they extract a big cost in soil health. Fertilizers and sundry agricultural chemicals seep easily into the ground, toxifying the soil and groundwater.

A 2019 report by the Centre for Science and Environment on the fertiliser industry in India – the world’s largest producer and consumer of fertilizers after China – warns that nitrogen pollution in surface and groundwater has reached “alarming levels”. Yet a shift away from chemical-based agriculture is a distant prospect, particularly in places such as Punjab where nitrogen content is “very low” almost everywhere.

Nutrient deficiency is not the only problem harming Indian soils and farming. India is also the 13th most water-stressed country, with 256 of its 700 districts having surpassed the safe limits for groundwater extraction. Punjab, again, the cradle of the Green Revolution, is witnessing a disaster, with three quarters of its districts having already overexploited groundwater resources. 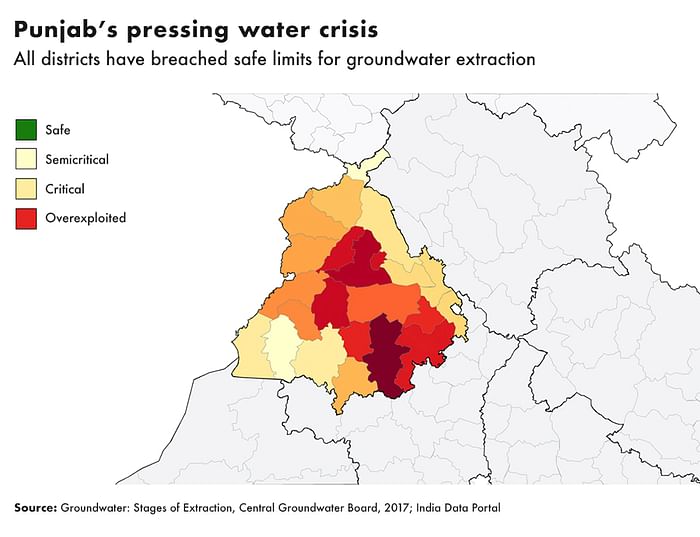 Is there a way out of this crisis?

There is, yes, but it will require a radical reimagining of how farming is done in this country. There are many sustainable practices that the most stressed states like Punjab, Haryana and Uttar Pradesh could adopt, not least from the Northeast. Mostly untouched by the practices of the Green Revolution era, the Northeast Indian states have maintained traditional organic systems of farming. Seven of the 10 states with the highest organic matter content in the soil are in the Northeast, Tripura being the sole outlier. In 2016, Sikkim became the world’s first region to have fully organic farming.

“In many ways, we are fortunate that the Green Revolution did not reach the Northeast,” says Siddhi Karnani, co-founder of Parvata Foods, an agribusiness startup helping small organic farmers in the Northeast access international markets. “Since the soil wasn’t harmed by the use of chemicals, it retains natural form and provides us with abundant natural flora and fauna. The organic matter content in the soil is higher than in other parts of the country. However, the driving force for organic farming in the region, I would say, is that for our farmers organic is not just a way of farming, it is a way of life.”

Transitioning to a fully natural agricultural system and arresting the degradation of the soil, however, will require an overhaul of the entire food ecosystem – from governments compensating farmers for low yields in the initial years to consumers shelling out more for food of better quality.

And it must be done urgently, for the clock is ticking on India’s soil health.

Article by: Poojil Tiwari is a data journalist making numbers interesting to read.

This report is published as part of the Newslaundry-India Data Portal Data Journalism Fellowship 2021.